Lesbian, gay, bisexual, transgender, queer, and questioning (LGBTQ) youth are more than four times as likely to report attempting suicide in the past year compared to straight/cisgender peers (Johns et al., 2019; Johns et al., 2020). Increased suicide risk among LGBTQ youth is due to minority stress-related experiences of stigma, discrimination, and victimization as opposed to being LGBTQ in and of itself (Meyer, 2003). Being Latinx in the United States (U.S.) also comes with unique experiences and challenges including racial-ethnic bias, acculturation stress, and immigration concerns (Silva & Van Orden, 2018; Valentín‐Cortés et al., 2020). However, little is known about suicide risk among Latinx LGBTQ youth. Using data from The Trevor Project’s 2020 National Survey on LGBTQ Youth Mental Health, this brief examines factors associated with attempting suicide among Latinx LGBTQ youth. 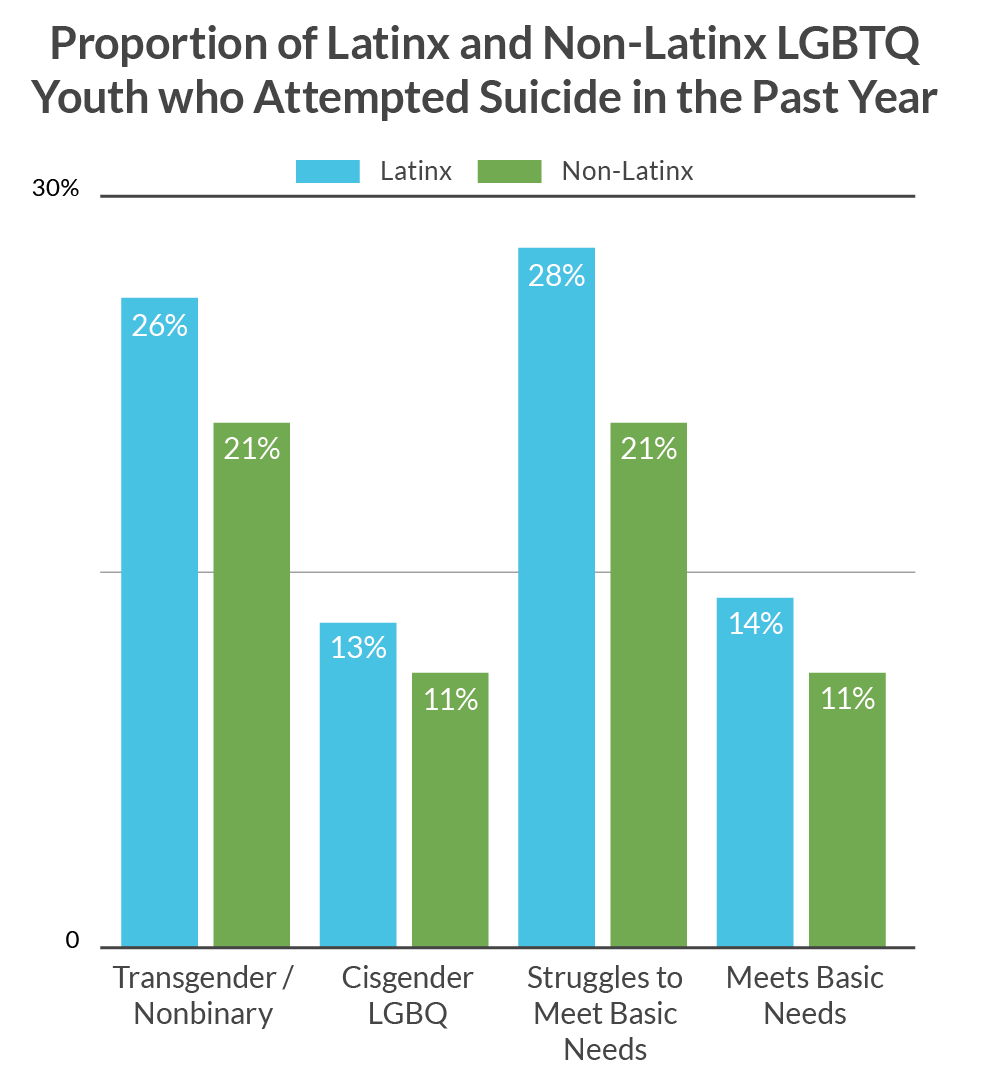 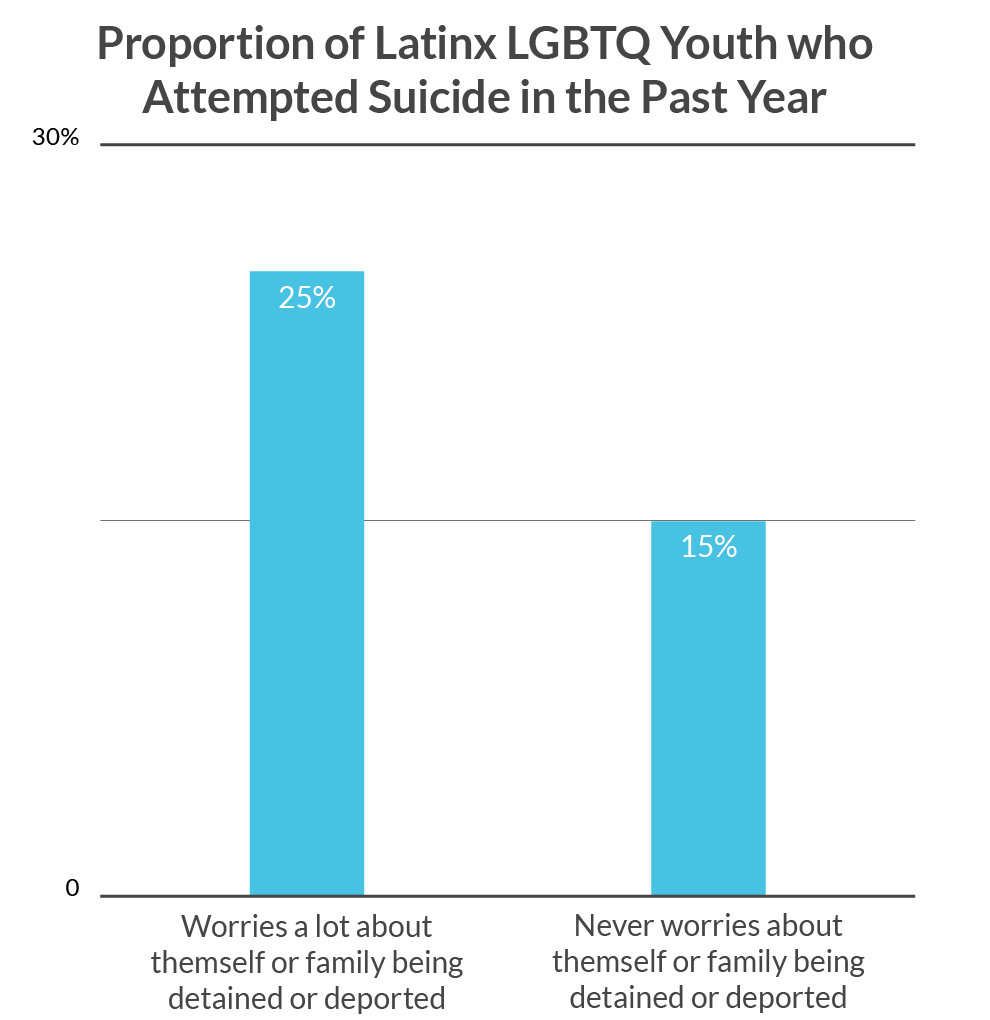 A quantitative cross-sectional online survey was used to collect data between December 2019 and March 2020. LGBTQ youth ages 13–24 who resided in the U.S. were recruited via targeted ads on social media. The final analytic sample consisted of 40,001 LGBTQ youth, with representation from 4,114 self-identified Hispanic/Latinx LGBTQ youth, including 525 who completed the survey in Spanish. Past-year suicide attempt was assessed with the question “During the past 12 months, how many times did you actually attempt suicide?” with responses coded as “none” compared to “one or more”. First, a logistic regression model was used to examine the odds of a past-year suicide attempt for Latinx LGBTQ youth compared to non-Latinx LGBTQ after adjusting for the associations of age, socioeconomic status, gender identity, and sex assigned at birth. Next, our measure of worries about immigration-related deportation and detention was included in the model to examine its role on the relationship between Latinx identity and higher rates of attempting suicide in the past year. Immigration-related worries were captured by a question that asked youth, “How often do you worry about you or someone in your family being detained or deported due to immigration policies?” with responses of “never,” “sometimes” and “a lot.” A separate logistic regression model was conducted among only the Latinx LGBTQ youth in the sample to examine the associations of attempting suicide in the past year with age, socioeconomic status, gender identity, sex assigned at birth, youth or parents being born outside of the U.S., completion of the survey in Spanish versus English, and worries about immigration-related deportation and detention.  All reported analyses were significant at p<.01.

All youth deserve to live in a world in which they feel safe and supported. To that end, suicide prevention initiatives need to be inclusive of Latinx LGBTQ youth and mindful of the unique findings described in this brief, particularly related to the impact of immigration fears. For Latinx LGBTQ youth, concerns around their own or their family’s potential detainment or deportation were related to significantly greater risk for attempting suicide, demonstrating that environments and policies strongly impact mental health. Individuals supporting Latinx youth should be aware of the impact that immigration concerns and specific immigration policies can have on their mental health and well-being.

At The Trevor Project, we are committed to supporting all LGBTQ youth who need us, including those whose challenges are connected to immigration concerns. Trevor’s Crisis Services team recognizes the impact that multiple forms of minority stress, including immigration fears, xenophobia, and racially-based discrimination, can have on youth mental health and is committed to providing safe and empathetic crisis support across our services. Additionally, Trevor’s research team is committed to ongoing dissemination of data that allows Trevor and others to better understand and address the needs of Latinx LGBTQ youth to support our mission of ending suicide among LGBTQ young people.