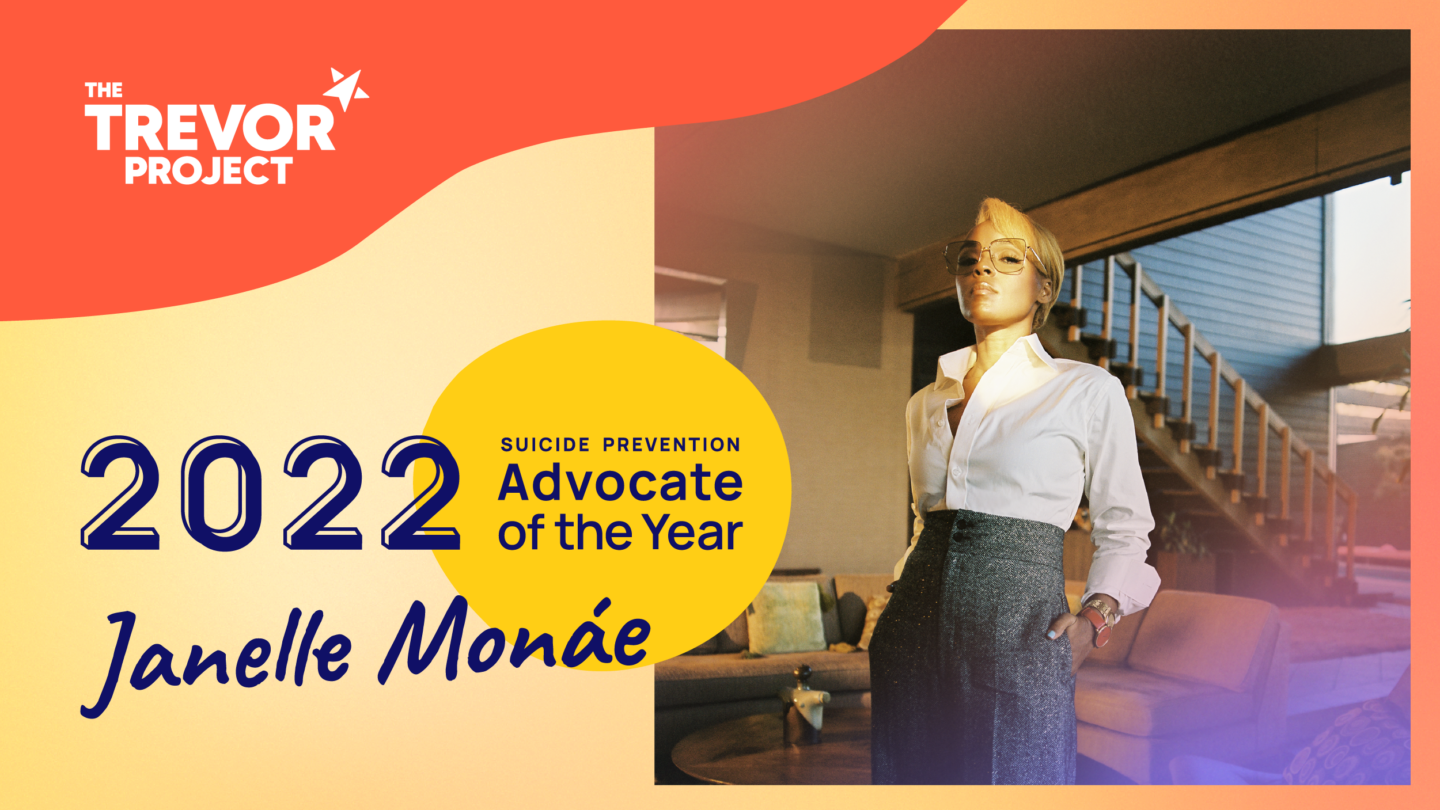 The Grammy-nominated global superstar is the second-ever recipient of the award, which recognizes influential public figures who champion the LGBTQ community and advocate for mental health awareness

The Grammy-nominated singer-songwriter, actor, and author has been a longtime champion for the LGBTQ community and conversations around mental health. A fierce advocate and activist, Monáe has consistently used their platform to elevate the voices and experiences of marginalized people. In a recent interview with CNN, Monáe explained, “my natural instinct has always been to stand up to bullies, and to protect the ones who are trying to just live and love in peace and in their authentic selves.” Over the years, the multi-hyphenate artist has proudly and openly shared their personal journey around their sexual orientation and gender identity. In 2018, Monáe came out as pansexual in a Rolling Stone cover story, and announced they identify as nonbinary on an episode of Red Table Talk this past April, stating: “I just don’t see myself as a woman, solely. I feel all of my energy.”

In accepting the award, Monáe said: “Growing up queer and Black in a religious household, I faced a lot of challenges trying to understand my identity and where I fit in as someone who always felt beyond the binary. We, as LGBTQ folks, as people of color, are a powerful and unstoppable community. I want every young queer person out there to know that I see you, you are beautiful in all of your forms, and you are never, ever alone in this world. As someone who has dealt with depression and anxiety, prioritizing and protecting your mental health is everything. Amazing organizations like The Trevor Project have got your back, and I will personally continue to advocate for you and celebrate you always. No matter what you’re going through, your life matters so much — don’t let anyone try to dim your light. Thank you to The Trevor Project for this incredible honor and for all that you do to support LGBTQ young people.”

Monáe has been outspoken about addressing negative mental health outcomes and ending suicide among LGBTQ young people – The Trevor Project’s mission. In 2019, Monáe took to Twitter to spark discourse around LGBTQ mental health, stating: “I wanna have a real discussion around bullies (kids and adults) who bully kids/people because of their sexuality. Bullying leads to kids & adults in the LGBTQIA [community] falling into depression & [dying by] suicide in many instances. What should the repercussions be for bullying?” They have also been candid about their own past struggles with depression and the importance of mental health accessibility and affordability. When speaking to The Grio in 2018, Monáe asserted, “I wish that our system here in America made mental health care more affordable, or quite frankly, free for every human being.” In normalizing these conversations, Monáe is helping to destigmatize mental health and create open dialogues around suicide prevention.

“Queer representation in the media can have a life-saving impact on LGBTQ young people, and Janelle Monáe is the embodiment of unapologetic self-expression,” said Josh Weaver (they/them or he/him pronouns), Vice President of Marketing at The Trevor Project. “Throughout their career, Janelle has been a trailblazer who constantly challenges the status quo – from their depictions of queer love in their music videos, to their iconic, gender nonconforming style, they continue to redefine the rules around how LGBTQ and BIPOC people can navigate through life. Our research found that 79% of LGBTQ youth reported that seeing musicians come out as LGBTQ made them feel good about their own identity, and Janelle’s willingness to let us in on her personal journey of self-discovery makes her the perfect recipient for this award.”

The Suicide Prevention Advocate of the Year Award adds to a long list of accolades for Monáe, who has been recognized for their work in the Oscar-winning film Moonlight and Oscar-nominated film Hidden Figures. Monáe will star in the upcoming Knives Out sequel Glass Onion: A Knives Out Mystery in December. The Trevor Project will award a new individual each year to celebrate possibility models, allies, and outspoken advocates fighting for those in the LGBTQ community to survive and thrive. To learn more about The Trevor Project, visit TheTrevorProject.org.

Lawmakers are also considering an anti-trans sports ban. Today, Alabama state Senate passed the “Vulnerable Child Compassion and Protection Act” (SB10), which would criminalize the provision of best-practice, gender-affirming care for transgender and nonbinary youth — even threatening doctors with prison sentences up to 10 years. The medical care ban will soon be voted on by the House, where lawmakers are also considering House Bill 391, which would ban trans youth from playing on school sports teams that correspond with their gender identity. “This legislation will endanger young trans lives in Alabama. It contradicts the consensus of major medical associations…

The updated rule further codifies protections for students against discrimination on the basis of sexual orientation and gender identity. June 23, 2022 — The Trevor Project, the world’s largest suicide prevention and mental health organization for lesbian, gay, bisexual, transgender, queer & questioning (LGBTQ) young people, applauded Secretary of Education Miguel Cardona’s new proposed rule for Title IX, the 1972 law that prohibits discrimination on the basis of sex in public schools, confirming that these protections extend to sexual orientation and gender identity, as well as sex stereotypes and characteristics.  “School should be a place where students learn and are…
Reach a Counselor