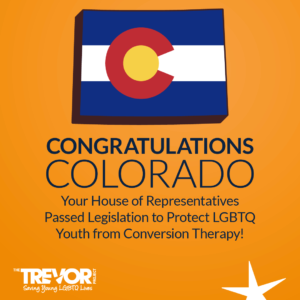 Denver, CO — The Colorado State House of Representatives voted yesterday in favor of HB1129 to protect LGBTQ youth from the dangerous and discredited practice of conversion therapy, which falsely claims to be able to change a person’s sexual orientation or gender identity. The bill is co-sponsored by Representative Dafna Michaelson Jenet and Representative Daneya Esgar along with Senator Stephen Fenberg. If passed, Colorado would become the 16th state to prohibit conversion therapy on minors, following New York earlier this year.

“We have been fighting for years to pass this bill in Colorado. I’ve testified and asked cities to sign proclamations against it in hopes of passing this bill,” said Representative Brianna Titone. “This year looks like the year we will finally be able to protect our LGBTQ youth from this horrible practice.”

“With this powerful bipartisan vote in the state house, Colorado is well on the way to protecting LGBTQ youth from conversion therapy,” said Sam Brinton, Head of Advocacy and Government Affairs for The Trevor Project. “We are encouraged to see this bill progressing quickly, which is a reflection of the urgent need to end this dangerous and discredited practice. As The Trevor Project continues to hear from young Coloradans in crisis, we know this legislation will save lives, and we’re committed to seeing it reach Governor Polis’s desk.”

The Trevor Project’s 50 Bills 50 States campaign works to support legislation like HB1129 to protect LGBTQ people from conversion therapy in every state. 50 Bills 50 States is the largest grassroots campaign in the world endeavoring to protect LGBTQ youth from this dangerous and discredited practice. The organization partners with mental health associations, youth organizations, LGBTQ groups, student clubs, faith communities, and educational institutions in every state by sharing stories, mobilizing volunteers, and informing policymakers to promote the submission and passage of powerful legislation. People can sign up to join The Trevor Project’s effort to end conversion therapy by texting “TREVOR” to 40649.