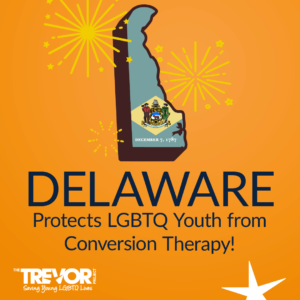 Supported by The Trevor Project, the leading national organization providing crisis intervention and suicide prevention services for LGBTQ youth, Senator McDowell filed SB65 in 2017. The organization supported the bill’s passage through its “50 Bills 50 States” initiative by supporting legislators in their study of similar legislation and by directing its network of Delaware volunteer activists to contact local legislators, encouraging them to support this critical bill to protect LGBTQ young people. The organization also worked with national partners such as the National Center for Lesbian Rights (NCLR) and Human Rights Campaign (HRC) and  to support the bill’s passage. By building coalitions, these national partners have been wildly successful at preventing conversion therapy for thousands of LGBTQ youth.

“I’m excited to see Delaware become the 14th state to protect LGBTQ young people from the discredited practice of conversion therapy, and the 5th state to do so this year alone,” said Sam Brinton, Head of Advocacy & Government Affairs for The Trevor Project. “I’m proud to continue working alongside legislators from both sides of the aisle nationwide to eliminate conversion therapy throughout the U.S.”

The Trevor Project’s “50 Bills 50 States” campaign works to introduce legislation to protect LGBTQ youth from conversion therapy in every state in the country. So far bills have been introduced or successfully passed in 34 states. People can sign up to join “50 Bills 50 States” by texting “TREVOR” to 40649.