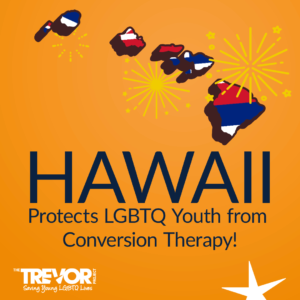 Supported by The Trevor Project, the leading national organization providing crisis intervention and suicide prevention services for LGBTQ youth, Senators Chang, Baker, and Rhoads introduced the bill on January 20, 2017. The organization supported the bill’s passage through its 50 Bills 50 States initiative by assisting in the drafting of the bill, and by directing its network of Hawaiian volunteer activists to contact local legislators, encouraging them to support this critical bill to protect LGBTQ young people. The organization also worked with State Rep Michael Golojuch, Chairman of the LGBT Caucus of Democratic Party of Hawaii, NCLR and HRC to support the bill’s passage.

“We’re seeing significant momentum to protect LGBTQ youth from the dangerous and discredited practice of conversion therapy, and The Trevor Project calls on even more states to join Hawaii in banning this barbaric practice,” said Amit Paley, CEO and Executive Director of The Trevor Project. “We look forward to continuing 50 Bills 50 States’ important work alongside new state legislators to protect even more LGBTQ young people nationwide.”

The Trevor Project’s 50 Bills 50 States campaign works to introduce legislation to ban conversion therapy in every state in the country. So far bills have been introduced or successfully passed in 34 states. People can sign up to join 50 Bills 50 States by texting “TREVOR” to 40649.