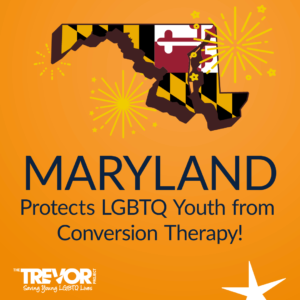 The Trevor Project is invested in ending conversion therapy in every state because youth from highly rejecting families are more than 8 times more likely to attempt suicide than youth from accepting families. The organization supported the bill’s passage through its 50 Bills 50 States initiative by working closely with Delegate Cullison to draft and pass the legislation, and prepared Q&A for legislators with partners such as Free State Justice on the sensitive topic. In addition, The Trevor Project managed a network of local 50 Bills 50 States volunteers who encouraged the state to pass the bill – over 100 calls and emails were sent to legislators across Maryland by its campaign advocates.

“Banning conversion therapy in Maryland is a victory in our fight to protect LGBTQ young people everywhere from this dangerous and discredited practice,” said Amit Paley, CEO and Executive Director of The Trevor Project. “I’m proud of Maryland legislators for voting to eliminate this practice statewide and look forward to working closely with other state legislators to do the same.”

“As a conversion therapy survivor, I identified with Delegate Meagan Simonaire’s moving testimony about her conversion therapy experience,” said Sam Brinton, Head of Advocacy & Government Affairs for The Trevor Project. “Working with Delegate Cullison to pass this bill means a lot to The Trevor Project’s volunteer advocates, and 50 Bills 50 States will continue to work to protect LGBTQ youth across the country.”

The Trevor Project’s 50 Bills 50 States campaign works to introduce legislation to ban conversion therapy in every state in the country. So far bills have been introduced or successfully passed in 34 states. People can sign up to join 50 Bills 50 States by texting “TREVOR” to 40649.