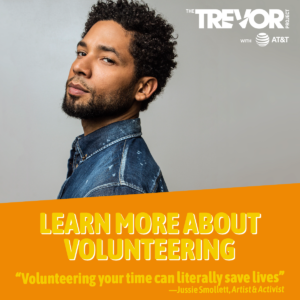 Lesbian, gay, and bisexual youth are more than four times more likely to attempt suicide than their straight peers, and nearly half of all transgender adults have made a suicide attempt – most before the age of 25. Each year The Trevor Project answers more than 68,000 calls, chats, and texts, but estimates that more than 1.5 million LGBTQ youth experience suicidal ideation and could benefit from its services. Volunteers who sign up through the “How to Save a Life” campaign will increase the organization’s capacity to serve more LGBTQ youth than ever before. The expansion is powered by AT&T’s $1 million commitment, the single largest in The Trevor Project’s 20-year history.

“More LGBTQ youth in crisis are reaching out to us than ever before – many over text and chat, two increasingly prevalent forms of communication for young people,” said Amit Paley, CEO & Executive Director of The Trevor Project. “Just over the last year our youth text conversations have increased by 165%. Training more volunteer crisis counselors will help us connect even more young people with our life-affirming crisis services.”

“It’s heartbreaking to think of the amount of LGBTQ youth out there who feel hopeless and alone, or think they don’t have support,” said Smollett. “Just one supportive person can decrease an LGBTQ youth’s risk of suicide by 30%, and The Trevor Project is giving everyone the amazing opportunity to be that person. I can’t encourage you enough to apply — volunteering your time can literally save lives.”

Volunteers can use a computer and stable internet to support LGBTQ youth from anywhere in the country. To become a volunteer, supporters can apply at TheTrevorProject.org/SaveALife. Successful candidates will complete a series of training courses that meet American Association of Suicidology accreditation guidelines and are designed to prepare volunteers to support LGBTQ youth in crisis. Among the volunteer crisis counselor trainees are AT&T employees from across the country. Employee engagement and volunteerism is an integral part of AT&T’s multi-year commitment to The Trevor Project.

“Our employees have a long history of stepping in to help those in need,” said Charlene Lake, senior vice president of corporate social responsibility, AT&T. “The Trevor Project is doing critical work by connecting LGBTQ youth in crisis to those who can help. We’re proud to support the “How to Save a Life” campaign and make these connections possible.”

AT&T’s commitment to The Trevor Project and other initiatives are the latest in its exceptional history of supporting the LGBTQ community. In 1975, AT&T was one of the very first American companies to prohibit discrimination against employees based on sexual orientation. Supporting the LGBTQ community is an enduring priority for AT&T, who continuously identifies ways to advocate and foster inclusivity.