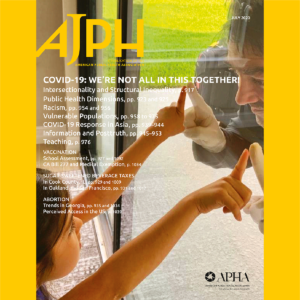 TODAY The Trevor Project announced that its research team has published a new peer-reviewed article in the American Journal of Public Health (AJPH) — the first study to look at associations between undergoing conversion therapy and suicide outcomes among LGBTQ youth. Conversion therapy is the discredited and dangerous practice of attempting to change a person’s sexual orientation or gender identity.

Entitled, “Self-Reported Conversion Efforts and Suicidality Among US LGBTQ Youths and Young Adults, 2018,” the study is included in the AJPH’s July 2020 issue.

“This study is the first to examine conversion therapy among LGBTQ youth and it adds to the overwhelming consensus that conversion therapy is detrimental to mental health and a clear risk factor for suicide. It is in the best interest of public health for lawmakers to enact protections for LGBTQ young people against this dangerous practice and to increase access to LGBTQ-affirming mental health care,” said Amy E. Green, Ph.D. (she/her pronouns), Director of Research at The Trevor Project.

“Despite what some might think, the population of LGBTQ young people who report undergoing conversion therapy is not a monolith. LGBTQ youth with lower family incomes, from the South, whose parents use religion to say negative things about being LGBTQ, who are Hispanic/Latinx, and who are transgender or nonbinary were all overrepresented among youth who report undergoing conversation therapy. These data underscore that efforts to address this issue must take an intersectional approach,” said Myeshia Price-Feeney, Ph.D. (she/her pronouns), Research Scientist at The Trevor Project.