“Taxpayers’ dollars must never again be spent on the dangerous and discredited practice of conversion ‘therapy’ — which has been consistently associated with increased suicide risk and an estimated $9.23 billion economic burden in the U.S.,” said Troy Stevenson (he/him), Senior Campaign Manager for Advocacy and Government Affairs of The Trevor Project. “Thank you Gov. Wolf for your leadership and for taking bold action to protect and affirm LGBTQ young people across the Commonwealth. We urge the state legislature to pass comprehensive state-wide protections and for governors across the nation to follow the Keystone State’s lead in ending this abusive practice.”

With the signing of this executive order, Pennsylvania is now the 27th state in the country to enact statewide protections against the practice of conversion therapy. 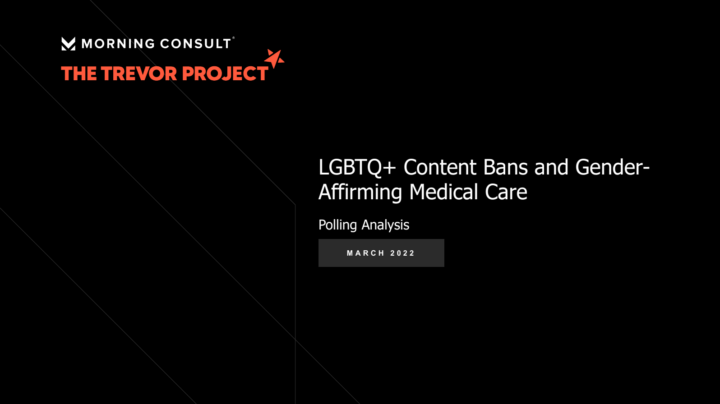 A majority of adults oppose banning books and censoring curriculums on LGBTQ topics, and a plurality felt that ages 5 to 11 (elementary school) are the most appropriate ages for students to learn about LGBTQ topics in classes like history, English, and health education. Only 1 in 3 adults polled said lawmakers should have the ability to outlaw gender-affirming medical care for minors even if such a ban is against the recommendation of doctors and major medical associations. March 30, 2022 — The Trevor Project, the world’s largest suicide prevention and mental health organization for lesbian, gay, bisexual, transgender, queer…

Today, The Trevor Project celebrated the defeat of House Bill 113 in the Montana House of Representatives, which would have prohibited licensed medical professionals from providing best-practice medical care to transgender and nonbinary youth. The bill was voted down yesterday during its third reading and then again today when a motion to reconsider failed. However, House Bill 112, which would restrict transgender women and girls from playing on school sports teams at the elementary school to college levels that correspond with their gender identity, continued on its procedural path to the Montana Senate. Both bills were initially passed by the…
Reach a Counselor