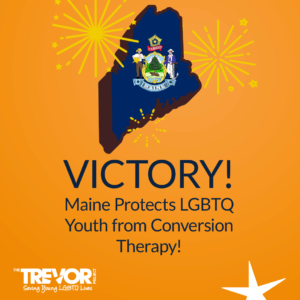 Augusta, ME — This morning Governor Janet Mills signed HP755, a bill to protect LGBTQ youth in Maine from the dangers of conversion therapy. The bill passed by an overwhelming majority for the second year in a row after Governor LePage vetoed the legislation last year. The Trevor Project and our allies applaud Governor Mills and the bipartisan coalition of lawmakers who took a stand to protect young Mainers from this discredited practice.

“The legislature and Gov. Mills are sending a clear and meaningful message to our LGBTQ young people. You matter. You belong. And you are loved for who you are,” said Representative Ryan Fecteau, the prime sponsor of the bill. “Conversion therapy is irresponsible and harmful. I am so proud that Maine is standing tall to affirm that no young person needs to ‘fix’ what is not broken.”

“With this signature, Maine has become a safer and more welcoming place for LGBTQ youth, who will never again need fear being sent to a licensed professional for the dangerous and discredited practice of conversion therapy,” said Matt Moonen, Executive Director of EqualityMaine. “We are grateful that Governor Mills, along with legislators in the House and Senate on both sides of the aisle, were able to come together to act to protect Maine’s youth.”

“The Trevor Project applauds the hard work of Representative Fecteau, EqualityMaine, and all of the advocates and lawmakers in Maine for their perseverance,” said Sam Brinton, Head of Advocacy and Government Affairs for The Trevor Project. “After the disappointment of last year’s veto, they came back stronger and passed legislation to protect LGBTQ youth from the dangers of conversion therapy. We will continue to push each and every day to insure that every state in the country follows Maine’s example and ends this cruel practice once and for all.”

The Trevor Project’s 50 Bills 50 States campaign has partnered with the Human Rights Campaign, National Center for Lesbian Rights, EqualityMaine, and GLAD, along with local advocates in support of these vital protections. People can sign up to join The Trevor Project’s effort to end conversion therapy by texting “TREVOR” to 40649.