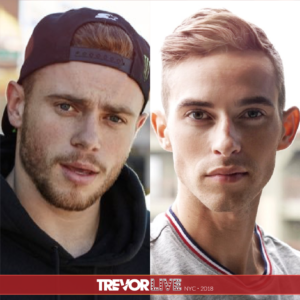 The Organization, Which is Celebrating its 20th Anniversary, Will Honor Lena Waithe, Greg Berlanti, and McKinsey & Company’s Dominic Barton on June 11 in New York City

Figure skater Rippon and Kenworthy became the first openly gay American males to qualify for the Winter Olympics with their selection to the 2018 U.S. team for the PyeongChang Games. Rippon won a bronze medal as part of Team USA’s figure skating team event. Rippon’s performance both on and off the ice made him a fan favorite of the Games and gave him a global platform to advocate for LGBTQ issues.  His candid remarks and sense of self were an inspiration to young and old alike. Rippon is currently vying for the Mirror Ball trophy on ABC’s “Dancing With The Stars Athletes” and touring with Stars on Ice.

“I’m really looking forward to hosting this event and recognizing Lena, Greg and Dominic for their support of The Trevor Project and contributions to the LGBTQ community,” said Rippon. “My journey over the past few months has been amazing and I never thought that being true to oneself would be so celebrated. It is both humbling and empowering and I plan to use my voice to support the causes I believe in and help others through their journeys. The Trevor Project has been assisting and supporting LGBTQ youth for more than 20 years and I am proud to be representing them at TrevorLIVE.”

At the 2014 Winter Olympics, Kenworthy became the first athlete to ever win an Olympic silver medal in slopestyle skiing. In 2015, Kenworthy also made history when he took the brave and bold step of coming out on the cover of ESPN Magazine, making him the first and only action sports / X Games athlete to go public, while being ranked No. 1 in the world. Kenworthy, a Sochi Silver Medalist, five-time X Games medalist and seven-time world champion, is the most versatile and best-known freeskier on the planet.

“It is an absolute honor to host the TrevorLIVE gala and to commemorate The Trevor Project’s impact on LGBTQ youth for two decades,” said Kenworthy. “I am inspired by the work of this year’s honorees and remain committed to supporting the organization’s work in the community.”

“Adam and Gus are star athletes and both use their platforms to encourage and support LGBTQ young people around the world,” said Amit Paley, CEO and Executive Director of The Trevor Project. “It’s an honor to have them support our mission of saving LGBTQ young lives.”

Additional names for TrevorLIVE New York will be announced in the coming weeks. For more information on TrevorLIVE NY, please visit https://ny.trevorlive.org

**A note to media: credentials are required to cover the TrevorLIVE New York gala. To apply, please complete the online application by 5pm ET on Monday, May 28.

TrevorLIVE is the signature annual fundraising event of The Trevor Project. This annual event brings together top entertainers and corporate leaders to support the organization’s life-saving initiatives. Learn more about TrevorLIVE at http://ny.trevorlive.org.